It was a really difficult period up until the late 1990s, since the government used to consider Refrigeration and Air Conditioning a Luxury Industry. This Industry attracted heavy taxation in the form of import duties and Excise Duty, totaling up to a whopping 200% for some products. IR never believed in short-term gains from evasion of taxes, and it was an uphill task to survive against the competition.

However, IR maintained great market standing by leveraging sourcing, cost control and a deliberate product mix. In the early 1990s, IR started progressing in Food Refrigeration and over the years gained experience in Ice Making Machines, Freezing Plants, Chillers and Cold Storages for temperatures in the range of + 5°C to - 40°C and for applications ranging from Storage of Films to Storage of Seafood. IR takes pride in having executed challenging assignments like setting up a Freezing System onboard a 55 Ft. Fishing Wooden Trawler and a $1 million ice plant in desert conditions in Oman.

Greater consciousness about food preservation in developing countries is leading to greater demands being placed on IR and this is one challenge IR is eager to face.

IRL is a part of 52-year-old Allstate Group involved in Refrigeration, Transformers, Photography, Leisure equipment, Real estate consultancy, Web development solutions & Media. Some multi-nationals that we have collaborated with include Fujifilm, DuPont, Brunswick Group and ASG Software Solutions, among others. 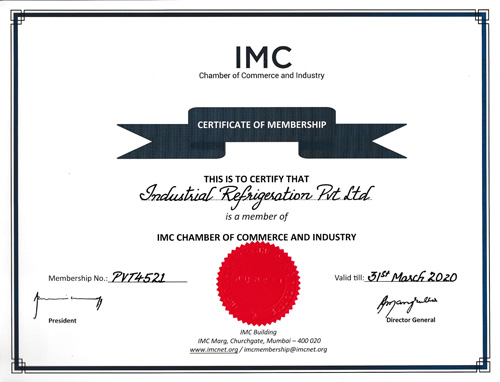